I recently acquired a Polaroid Snap for Christmas. It’s an instant camera that produces images about the size of a business card. It has options for color, black and white, and sepia. You can shoot in photobooth mode where you have multiple images on one print, and you can add borders as well. It also allows you to save your images to a Micro SD card.

I have to say, I’m quite impressed with this little camera. I also have two instant cameras that are a bit more classic in their operation, Fujifilm Instax Mini 90 Neo Classic Instant Film Camera and a Fujifilm INSTAX 210 Instant Photo Camera. I also recently acquired a film camera, the Holga 120N Plastic Camera which I wrote about here.

The wonderful thing about the Snap is that it has so few options for modifying your shot that you get to focus entirely on the creativity of the shot. The difficult thing about this camera is that the viewfinder is incredibly vague, and it’s hard to really compose a shot because chances are it won’t turn out that way, and with physical film in the camera, you don’t have the luxury of the endless amounts of shots you get with digital.

Overall, the camera is easy to use, and the results are incredibly playful! I’ll be using this camera frequently in the future.

I purchased a $33 plastic film camera that I just received, the Holga 120N. I haven’t shot film since I had a 110 film camera when I was younger, this camera takes 120 medium format film. The point of the camera is that there are light leaks on the film due to the poor quality of the camera, which is ideal for beautiful vintage effects. I’ve loaded my first roll – can’t wait to get it developed!

I do have a Diana Lomography lens for my DSLR, but the light leaks aren’t the same. On the Holga, each camera has a lack of quality control, so every one is slightly different. This means that you could shoot the same picture on three Holgas, and get three different shots.

This camera comes with two options for the size of pictures, square or vertical. I chose the square format. However, I did decide to purchase an adapter so it will take 35mm film, which is cheaper than the 120 film. I’m going to play around with both and see which I like better. 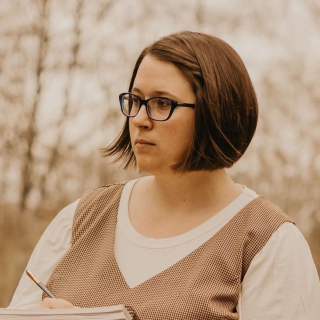 I’m a lifelong writer, photographer, and visual artist. I love reading and writing in all genres, with a focus on speculative fiction. When painting and photographing, I love to focus on little things we easily miss, and I focus on a fast, loose style. I have created a life filled with joy, and I feel like it's my purpose to share that with the world through all my art.